My Husqvarna is a 19e, which is a sleek, classic-car-shiny piece of vintage goodness. It runs, but when I received it the v-belt was broken. I took the broken belt out and measured it and bought a 19 1/4″ lug belt to replace it. I’m not sure if I’m doing something wrong or if I measured wrong and the belt just doesn’t fit or what, but I can’t get the damn thing back in the machine. The compact cast iron body of the machine is visually appealing but difficult to open up and access. To really get in there I had to remove the base which has the motor and wiring still awkwardly connected to the body, remove the handwheel and remove the reduction gear thing-y. I had cut the original belt off to measure, and as usual, regret not carefully photographically documenting the position of everything first. The technical manual helps, but it has line drawings that aren’t especially clear on the position of small parts and springs and where exactly everything should be. 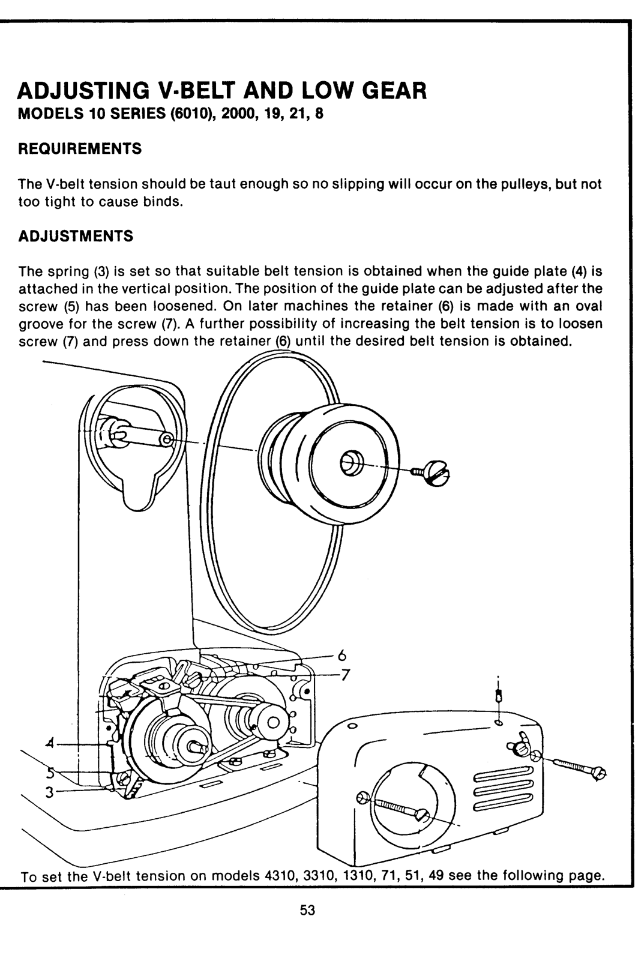 My machine is filthy; I keep tinkering at it with alcohol and q tips or Mrs. Meyers basil scented cleaner on the parts that aren’t really moving and potentially damaged by the moisture. (Too many chemically fumes makes me dislike the process.) There are some parts on that reduction gear that were tricky to replace when I tried to put the (too short?) lug belt on and reassemble.  Trying to get it on was a truly awful time suck, since the belt has to go over the handwheel and loop over the reduction gear. But to get it on the reduction gear you have to get past the large outer gear on the reduction assembly (in the photo above it’s the gear to the farthest left). I tried doing this first and putting it on the handwheel last but it’s just not possible with the angles and the tension on the belt. It was an incredibly awkward process compared to a Singer, where you usually just loosen the motor mount bolt and create a little slack, loop the belt where it needs to go, and put everything back in place.

I was also not super impressed by some of the components of this gear setup. While the machine is solid and seems like it’s well built, the case that goes over the motor and the smaller belt is plastic and is, of course, cracked where the screws go. It probably won’t ever be all that secure when I put it back on. The reduction gear itself is not exactly solid feeling. It’s plastic of some kind and probably would be one of the first things to go to crap on the machine. There is a little plastic bracket that fits inside a part mounts the reduction gear to the rest of the body–that’s cracked too. It fell out during disassembly and I had no idea where it went originally, but it fits inside that mount and over a two pronged metal piece. Seems like a less-than-efficient design. There is a spring and a metal arm toward the bottom of the assembly that I’m not sure exactly what position to return to when I’m finished either, but we’ll see.

So the Husqvarna and I are at a standstill until the 15″-21″ stretch belt I ordered arrives. I read good things about the lug belt, but I think I’ve put about 4 hours into it so far and I just don’t know how the improved traction is worth all that. If/when I get a belt successfully installed on this, I’ll definitely post a step by step since the 19e seems really difficult to find any specific information on.